How Airlines Are Starting To Solve NFFs? 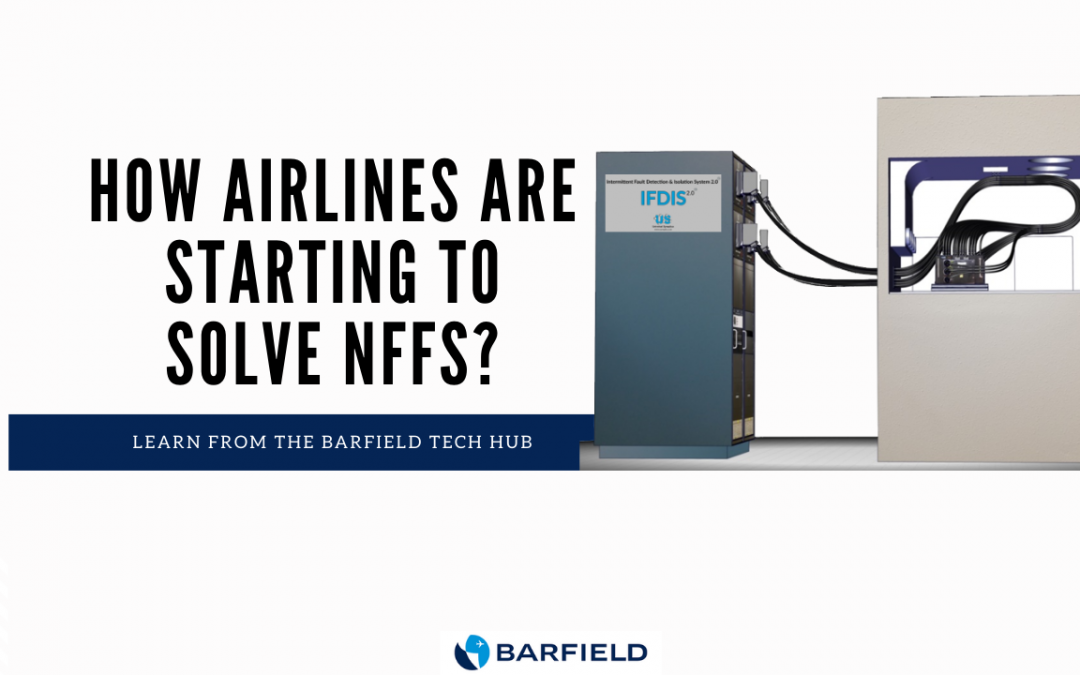 No Fault Found (NFF) is a standard term used in aviation, and typically happens when a part removed from an aircraft, due to poor performance, is sent to an MRO repair shop for testing. The repair shop cannot replicate or find the problem. The MRO shop tests the unit and if it passes all tests, the unit is sent back to the operator as NFF.

Now, the same unit could continue having problems that cannot replicate on the bench. Many times, micro-breaks, bad soldering, vibrations, could create intermittences that are undetectable by standard equipment. The unit is removed and sent back to the MRO shop and the cycle continues. Airlines often-times have a policy to retire the unit after three NFF test results. This unit will be considered “rogue” or unserviceable.

Aircraft OEMs, also have processes to deal with rogue units.

At the MRO level, depending on the Component Maintenance Manual (CMM) for the particular part, Original Equipment Manufacturers (OEM) will provide a set of instructions on how to perform a deep test on the unit. This will entail doing a temperature test and a vibration test to capture the anomaly (“bake and shake”).

It is highly probable that after performing the deep test, with environmental stimulus (“baking and shaking”), the unit is returned to service and continues to present problems.

What are the different intermittence stages in No-
Fault Founds?

One of the possible reasons that vibration and temperature chambers still would not be able to replicate the problem is related to the sensitivity of the equipment. There are three stages in which intermittences occur. 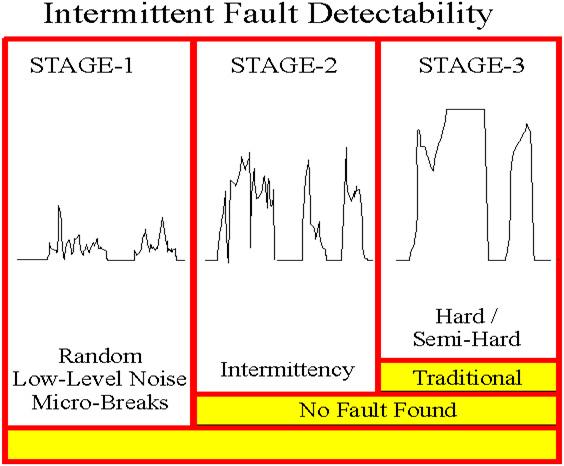 Equipment capturing Stage-3 hard or semi-hard fault is not built and not capable of capturing Stage-1 or Stage-2 intermittent faults  where these micro-breaks are detected.

Micro-breaks could occur as follows:

Scanning each circuit with minimum sensitivity will not detect nanosecond dropouts, nor will it be able to isolate a fault that is random in nature, thus, missing the moment in which the intermittence occurs.

To be able to capture Stage-1 and Stage-2 intermittences the system needs to be listening to all circuits simultaneously at all times with nanosecond sensitivity.

Standard systems use a scanning method, latching to each circuit independently one at a time or a few at a time. This method will not capture intermittence, due to the random nature of occurrences and the fact that they could appear after the latching of a prior circuit.

By testing all circuits at all times, the probability of detection increases in such a way that no defects are missed.

What are aircraft operators considering to detect NFFs?

The PFID is in the Boeing Aircraft Maintenance Manual (AMM) under procedures for “Intermittent Wiring and Check- Special Detailed Inspection” for all Boeing aircraft.

The PIFD is a portable unit with the capacity to test 128,256 or 512 points. Recently added in the Boeing Aircraft Maintenance Manual (AMM) under procedures for “Intermittent Wiring and Check- Special Detailed Inspection” for all Boeing aircraft, makes it an ideal tool for troubleshooting on and off-wing complex wiring systems. 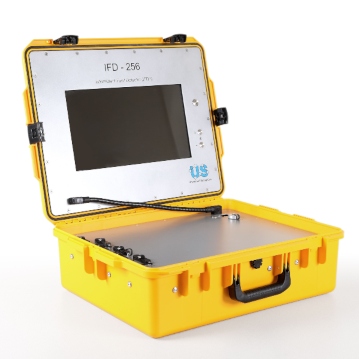 The IFDIS 2.0™ is a stand-alone unit, capable of  testing all points simultaneously with the capacity to handle 1280 points incrementally in a modular environment. IFDIS 2.0™ connected to an environmental chamber and vibration table is capable to stimulate components as if in flight with a nanosecond precision to capture Stage-1, and Stage-2 intermittent faults. 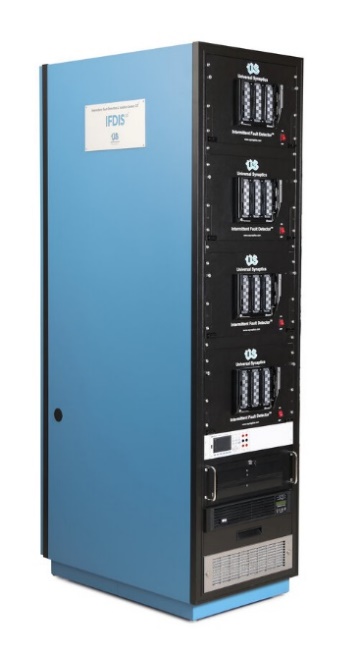 How does an airline benefit by finding NFFs?

A typical flight control computer has more than 500 electrical pins/points between the equipment and the chassis that connects it to the aircraft. Below is an image of a flight warning computer for an Airbus. 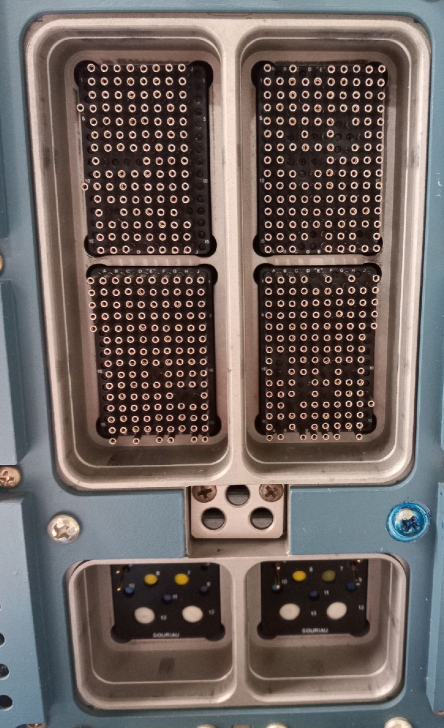 Back of a flight computer showing all the different electrical points.

Internally these units consist of several boards connected to a motherboard. 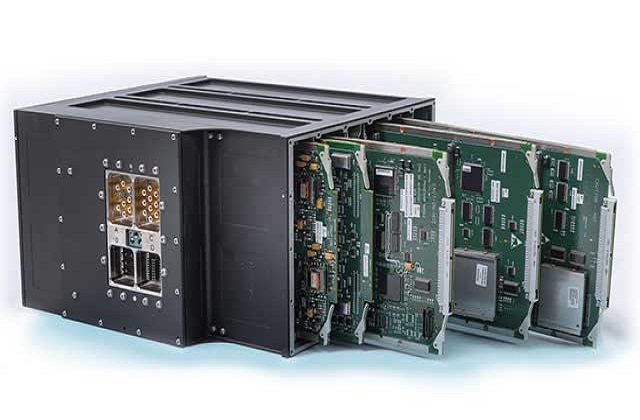 MROs may swap and repair boards, but seldom test the motherboard hosting the cards. Leaving room for failure as the contacts of the motherboard could have corrosion, bad contacts, or undetected, lurking issues.

The IFDIS 2.0™  solves this problem by mapping all the connections of the Unit Under Test (UUT), and simultaneously monitoring with sensitivity all test points and circuits, capturing and isolating where the intermittence occurs. Similar to having an oscilloscope on every circuit, set to monitor the precise moment when an intermittent disruption occurs.

The image below shows the setup of the IFDIS 2.0™ with an environmental chamber and vibration table.

The example Fault Isolation Graphic below will inform the operator what connection failed to allow for surgical repair of the intermittent fault(s).

Currently, IFD technology is used by the United States Department of Defense (DoD) on several programs such as the F-35,  the F-16 , F/A-18 and other weapon systems. It is approved by Lockheed Martin and Boeing recently approved the Portable IFD in their Aircraft Maintenance Manual (AMM) for all Boeing commercial aircraft. Barfield, supports the commercial aviation market of this technology.

In summary, airlines are starting to implement IFD technology as the Return on Investment (ROI) is quantifiable with a short-term payback period. This new technology that detects intermittence faults of electrical system will drastically improve safety and minimize costs in aviation operations. 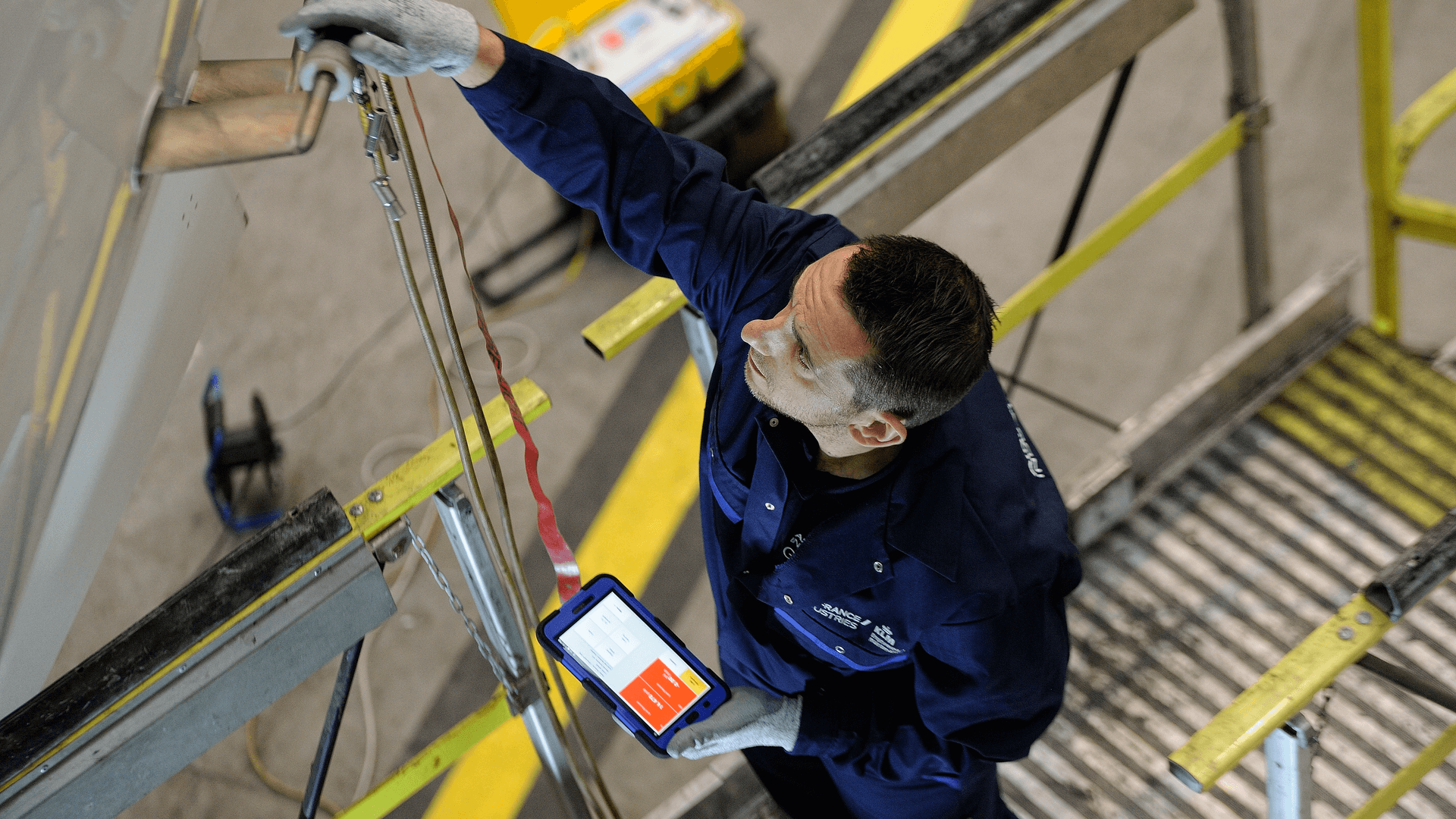